You most likely are deploying an RFID solution to save your business costs, so of course you want RFID hardware that gets you the maximum bang for your buck. For this reason, the Impinj Speedway RFID Reader is an ideal way to get a fixed reader RFID solution that provides the highest amount of performance for the lowest amount of investment.

The Impinj Multiplexor System is a great way to ensure your ROI for three key reasons:

Typical use cases that can benefit the most from the Impinj Multiplexor System include:

The Impinj Multiplexor can provide a single Speedway R420 Revolution RFID Reader with connectivity to up to 32 RFID Antennas. This volume of connectivity is practically unheard of with a typical fixed RFID reader, which usually connects to somewhere between 2-8 antennas. With the ability to connect 32 antennas, the Speedway R420 can achieve levels of RFID read range far beyond what a single fixed RFID reader can do.

So now you know a bit about what the Impinj Multiplexor System is and how it can save you money. The next important piece of knowledge is to know how to deploy this system.

Installing an RFID system takes time. One must learn how to properly connect the cables, where to place the hardware to achieve the best performance, how to configure the settings on the reader, etc. While it is true there is a learning curve to installing an RFID system, this does not have to slow down your RFID project to a point where it impacts productivity. There are ways to deploy a system easily and quickly so that you can spend time learning and understanding how the RFID solution will work with your process rather than spending all your time programming a bunch of RFID readers.

Some RFID systems with expansive coverage require several RFID readers to achieve the end goals. This is not the case with the Speedway Reader. With a single Speedway Reader, 32 antennas can be easily connected and distributed around the space in which the reads will be conducted. These antennas can all be controlled easily through the reader. With the Impinj Multiplexor System, you are able to create one single system of vast RFID coverage, rather than attempting to balance a number of systems.

Take a look at the chart below for an example of how the Impinj Multiplexor System, composed of the Impinj Speedway Antenna Hub and Impinj GPIO Box, works. 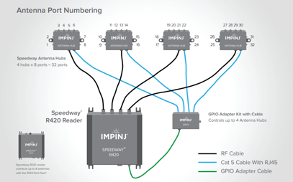 Connecting the Impinj Multiplexor System to a Speedway RFID Reader

For more information on how the Impinj Multiplexor and Speedway RFID Reader works, please contact us!